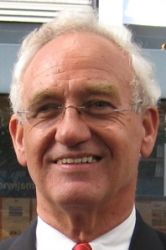 After his high school, Frans Ververs started studying in Delft. First Technical Physics, because Mathematics and Computer Science did not yet exist as a standalone programme in Delft. In the end he graduated from the Mathematics subdivision with specialisation in computer science.

In 1969 he became a student assistant, after which he became a scientific assistant in 1971. After that, he became a senior lecturer in software development systems at Prof. Van Katwijk. In his function, he was an indispensable factor and support and support for a number of graduates.

During his student time, he was not very active at CH, although he had already experienced CH activities as a participant. However, this changed quickly. At Christiaan Huygens he has organized weekends for senior students, and participated even more often. Even on freshmen weekends he is often present. As a supervisor he also participated three times with a study trip to Sweden, Japan and Eastern Europe.

At the faculty, Frans Ververs has also laid some solid foundations: in the Faculty Board and the Faculty Council, for example, but also as chairman of the Barcommittee. Due to his jovial and exuberant personality and student-minded attitude, he is a very appealing and approachable figure within the computer science community. What few people know is that Frans Ververs was at the cradle of the computer science song: Programmeren kun je leren!