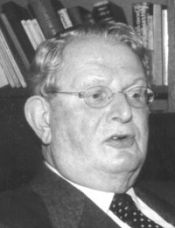 On the 22 December 2004 Albert Grootendorst passed away, emeritus professor at Delft University of Technology. He was renowned for his translations of Latin texts, and has numerous scientific publications regarding the history of mathematics on his name. His Dutch trilogy ‘introductie in de analyse’, written in 1974, is still commonly used to this day. He was a prominent member of the ‘Wiskundig Genootschap’ and he effortlessly combined his academic career with organizing all sorts of activities for mathematics teachers and professors. He was a prominent member of the mathematical community, having been the chairman of the exam committee ‘Wiskunde Akten voor het Middelbaar Onderwijs’ for years.

Albert Grootendorst was born in The Hague and has lived there his whole life. He took his final exam of HBSB in 1942. As there was little on the horizon for studying at a university because of the war, he took a Gymnasium state exam. In 1945 Grootendorst started studying Classical Languages at the University of Leiden, and a year later he joined the Faculty of Sciences. After his doctoral degree in mathematics in 1952, Grootendorst became a professor at the Haganum Gymnasium and from 1956 he joined the Delft University of Technology. First as instructor, then as a lecturer and finally as a professor. He was often asked as a member of committees and councils. Also in a national context, Grootendorst has done a lot of government work. From 1966 to 1970 he was secretary of the mathematical society. He has been chairman of the ‘Landelijk Werkcontact voor de Geschiedenis’ and of the ‘Commissie Persoonlijke Archieven van Wiskundigen van het KWG.’

Prof. Grootendorst had a formal relationship with students, but nevertheless he always maintained a good relationship with them. In 1988, Mr. Grootendorst became a Honorary Member of W.I.S.V. ‘Christiaan Huygens’. Mr. Grootendorst was proud of the honorary membership. Until a few months before his death he was a loyal regular at the association; he visited all meetings with a passive character. He was a real gentleman who one could always chat with, and he enjoyed a quick-witted debate. Some of the countless lectures he gave to the study association have appeared in the kaleidoscope series he edited.

In addition to his work as a teacher and professor, Mr. Grootendorst found the time to write a dissertation; In 1959 he graduated from Professor Kloosterman in Leiden. He was devoted to both the alpha and the beta science, as a teacher and as a researcher. Additionally, Mr. Grootendorst was committed to the translation of mathematical texts from Latin. His activities involved not only his own research, but also the editing of many bundles.

On October 25, 1989, Albert quit as a professor of the Technical University. He then began the translation of Latin into Dutch and English of the work Elementa Curvarum Linearum (Principles of Curved Lines), written by the Board of Directors Jan de Wit. This work in two parts can be considered as the first textbook on analytical geometry. Albert has almost completely completed the translation of the Elementa Curvarum linearum. The Dutch translation has appeared at the Center for Mathematics and Computer Science, the Liber Prius in 1997 and the Liber Secondary in 2003. In 2000, the English translation of the Liber Primus appeared. The English translation of the Liber secundus is as well as completed. Mr. Grootendorst tried to finish this himself, unfortunately he did not make it. The second part appeared posthumously in 2010.

Albert Grootendorst regarded teaching as officium nobile, a noble act, and acted on it. We had to say goodbye to an inspired teacher who possessed a great deal of knowledge and wisdom, and thoroughly enjoyed spreading this knowledge.